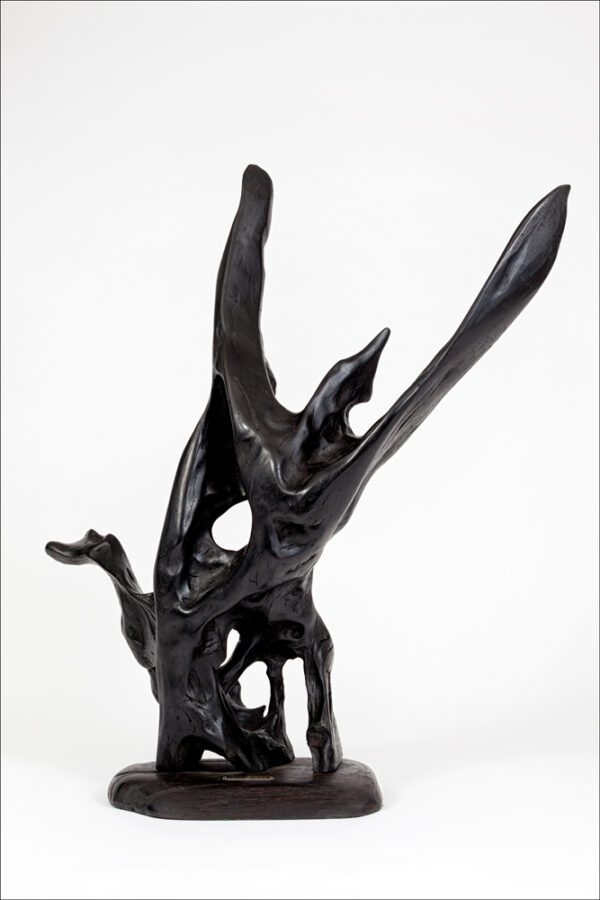 I see the gracefulness of the swan who is appealing to God to save them from their terrible fate.

I feel deeply the isolation and loneliness of the children in this horrific situation.

I found this piece for my bog oak sculpture in the Foxhall Bog near Loughrea in County Galway. It had lay in a very remote part of the bog where no human had travelled for years. Having dried it for a considerable amount of time in an open shed, I began to work on my bog oak sculpture. The well known fable of the Children of Lir from Irish Mythology immediately came to mind as the expressions within the piece of wood spoke to me straight away.

Long a go there lived a King called Lir. He lived in a castle with his wife and four children Fionnula, Aodh, Conn and Fiachra.

Lir s wife died and they missed her very much. The  King saw that the children were very sad and that they needed a mother, so he decided to marry again. Lir married his wife s sister who was called Aoife and everything was grand for a while, but she became jealous of the time Lir was spending with his children. Aoife was not kind hearted and she decided to get rid of the children. She realised that Lir loved the children more that herself so she felt that she had to do something about the situation.

Aoife, brought the four children swimming to Lake Derravaragh and she took out her magical wand, turned them into swans and banished them to isolation for 900 years.

When the children did not return home that evening, the king went to look for them beside the lake. But all he saw were four beautiful swans. To his amazement one of the swans called out. It was Fionnula. She told him what Aoife had done to them. Lir returned to the castle and pleaded with her but she would not listen and would not reverse the spell. Lir, as a result drove her from his castle and spent all his time at the lakeside with the swans, talking to them and listening to their songs. The children spent 300 years in Lake Derravaragh, 300 further years in the Sea of Moyle between Ireland and Scotland and the last 300 years in Glora. The swans were now very old and tired, but life in Innis Glora was a bit easier and they had plenty of food.

Then one morning, they heard the sound that they were waiting for. It was the sound of a Christian Church Bell, which turned them into humans again. They were baptised by a monk called Caomhog but soon afterwards they died as they were now over 900 years old.

The retelling of this ancient Irish myth of King Lir and his four children and his powerful wife Aoife, forms the basis of the ballet classic Swan Lake.