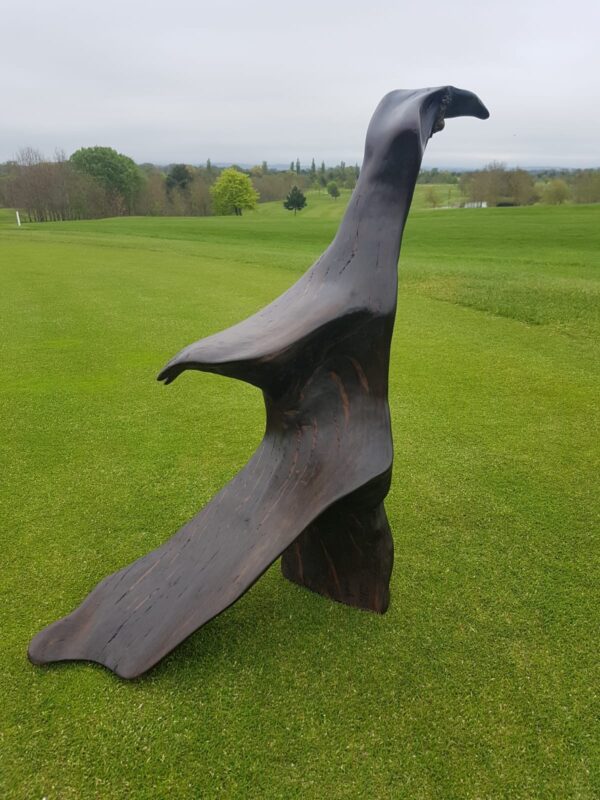 Just as the Morrigan could transform, this bog oak has also been changed into a very striking piece of art.

In this bog oak sculpture, I relate the story of the Morrigan. The Morrigan is one of the many prominent figures to feature in Irish Mythology and she is primarily associated with war\battles. She was a gifted shape shifter and often appeared as a crow. The Morrigan was known as the Goddess of war and could predict the death of warriors in battle.

She first appeared to encounter Cuchulainn while he was defending the province of Ulster from Queen Maeve and her army. The story goes that the Morrigan fell in love with him and she tried to seduce him, before he went into battle, but he declined her despite her immense beauty.

When he spurned her advances, she attacked him, first as a eel, then as a wolf and lastly as a heifer. Cuchulainn overcame her and in her exhaustion she appeared as an old woman milking cows. She gave him some milk and he blessed her.

Shepard s sculpture of the death of Cuchulainn in the General Post Office Dublin is worth a visit to see this magnificent work of art.

The crow or Morrigan is perched on Cuchulainn shoulder to signify that he was dead and now his enemy could safely approach him.