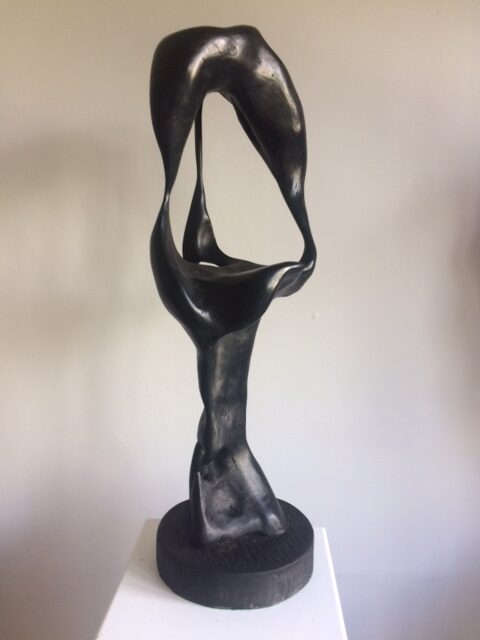 In Ireland we are very fortunate to  encounter and hear birds singing everyday, as we have retained a lot of our hedge rows unlike some other European countries.

In this bog oak sculpture, I want to high light the importance of the birdlife in our world.

This particular piece of bog oak was found near the Hill of Allen C. Kildare. The hill is situated at the easternmost point of the Bog of Allen and it is from this hill that the bog gets its name.

According to legend, Fionn McCool had a fortress on the hill and used the surrounding flatlands as a training ground for his warriors. Fionn was also a keen hunter and often hunted with Na Fianna on the Hill of Allen. It is believed also by many that Fionn originally caught the Salmon of Knowledge in the nearby River Slate.

The legendary  poet Finn Eces spent seven years looking for the Salmon of Knowledge, a fish that will grant all the worlds knowledge to whoever eats it. He is unsuccessful until he takes the young Fionn as his charge. When Fionn cooks for him, he burns his thumb and puts it in his mouth to cool his pain, and therefore receives the fish s knowledge. Little did Fionn know that all of the salmon s wisdom had been concentrated into that one drop of fish fat. When he brought the cooked meal to Finn Eces, his master saw that the boy s eyes shone with a previously unseen wisdom. Finn asked Fionn if he had eaten any of the salmon. Answering no, the boy explained what had happened. Finn realised that Fionn had received the wisdom of the salmon, so he gave him the rest of the fish to eat.

Through out the rest of his life Fionn draw upon this knowledge merely by biting his thumb and consequently became the leader of the Fianna.